Self-government as a model for the future 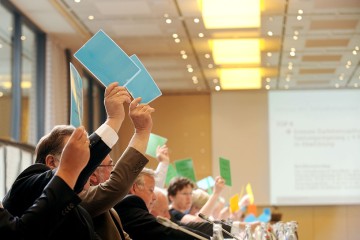 The principle of self-government is based on a simple realisation that if those involved look after their own affairs, they usually do so in an unbureaucratic, problem-orientated and practical manner. For this reason, this democratic element can be found in many areas of public life in Germany. From the outset social security for those who fall ill, too, was organised with as little state intervention as possible, and has since then proven to be a guarantor for a free, pluralistic system which guarantees high-quality health care for all insured. Under the self-government principle, administration is typically as free as possible from state influences and is carried out on an autonomous and independent basis by those employers and insured who are involved in the social security systems. Self-government manifests itself in the decision-making bodies of the social insurance institutions being in most cases composed of equal numbers of representatives of the employers and of the insured (the Substitute Funds are an exception with representatives of the insured only). The social insurance elections in the individual health insurance funds form the democratic core of health insurance. They take place every six years, and are free and secret. Insured and employers separately elect the representatives of their respective group on the basis of proposal lists according to the principles of proportional representation. The self-government bodies of the Substitute Funds, however, are exclusively composed of representatives of the insured.

Self-government is the fundamental principle of social insurance. This also applies to the National Association of Statutory Health Insurance Funds. Each fund delegates one representative of the insured and one representative of the employers to the Members’ Assembly, with the exception of the Substitute Funds which each second two representatives of the insured. The voting weight of the delegates is in line with the market share of their respective health insurance fund. The Members’ Assembly elects both its own Chair and the members of the Administrative Council every six years. The full-time Board is elected by the Administrative Council, which also adopts the budget. This proven procedure will continue to ensure an optimal representation of the interests of the health insurance funds and their 70 million insured.

The Chairs of the Administrative Council of the National Association of Statutory Health Insurance Funds are Dr. Volker Hansen and Uwe Klemens.

You will find further information about the bodies of the National Association of Statutory Health Insurance Funds here.